The last few months of WikiLeaks controversy has surely peaked your interest, but when viewing the WikiLeaks site, finding what you want is quite a hard task. 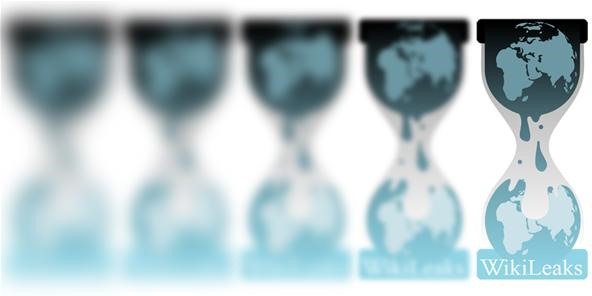 Despite rumors of easy access via the Kindle and iTunes App Store, there currently is no way to view the leaked documents without a little digging.  The version on sale at Amazon is NOT the cables in their entirety.  Amazon recently added this warning to the product page:

This book contains commentary and analysis regarding recent WikiLeaks disclosures, not the original material disclosed via the WikiLeaks website.

Apple recently removed the WikiLeaks application, too, which sold for $1.99 and let people view material from WikiLeaks on an iPhone, iPod Touch and iPad. 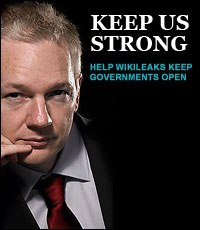 "We removed the WikiLeaks App from the App Store because it violated our developer guidelines," said Trudy Muller, a spokeswoman for Cupertino, California-based Apple. "Apps must comply with all local laws and may not put an individual or target group in harm's way."

But you CAN still enjoy the recent Cablegate documents on WikiLeaks.  You just have to know how to sort through all the data.  But be aware, not all of the documents have been released yet.  Only a small portion (about 2,000) have actually been published, with the remainder to be published over the next couple of months.

PS: If you want to see an odd mapped out visualization of the text contained on WikiLeaks, check out the DataBlog at the Guardian.

Since the original WikiLeaks site has been shut down (wikileaks.org), you're going to have to gain access through one of the many mirror sites.  Below are a few places you can find the WikiLeaks site.

What you're interested in is the Cablegate Documents, where you'll find roughly 2,000 of the 251,287 U.S. Embassy Diplomatic Cables, which first started uploading on November 28th, 2010.  It's the "largest set of confidential documents ever to be released into the public domain.  The documents will give people around the world an unprecedented insight into the US Government's foreign activities." 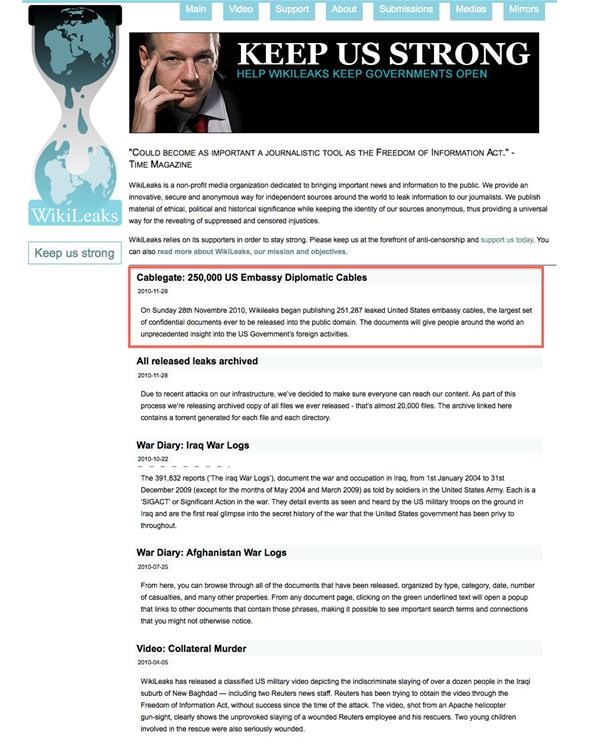 From the main page of one of the mirror sites, you'll find a link to them.  For this (and future) examples, I'll be using this one:

WikiLeaks themselves have published a mini-tutorial on viewing the Cablegate archives, mentioning how you can explore the data, plus giving you some key figures from the documents. 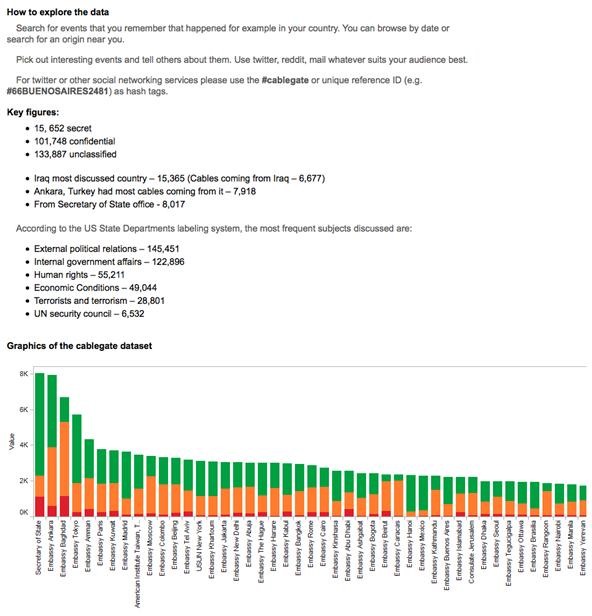 On the WikiLeaks website, there's multiple ways to browse the Cablegate archives.  You can browse recent articles written about specific cables and you can browse cables by their release dates, creation dates, origination, tags and classifications.

You can also download an archive of the entire website (download torrent file here), but it only provides html links, which is perfectly fine for most, once you figure out what you're looking at. 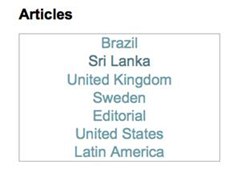 Articles are not cables.  They are commentaries on specific cables published on WikiLeaks, outlining what they are about.  There's some written in other languages, but the ones we English folks should play attention to are the ones labeled "United States" and "Editorial".  There's a few articles in each about the DDoS attacks on WikiLeaks and the problems with MasterCard and PayPal.

Browse the Cables by Release Dates

These are not the dates the cables were sent, but the dates on which they were published in the WikiLeaks archive.

If you've already browsed all of the cables from the first day of publish, then there's no reason to go back to them, unless you found some gold.  So stick with the cables you haven't read.

Articles have been added to Wikileaks everyday, from the first publish date of Nov. 28th to the most recent, Dec. 21st.

Once you've picked your date, you'll be directed to the articles entered that day.  The cable results will include the following information: 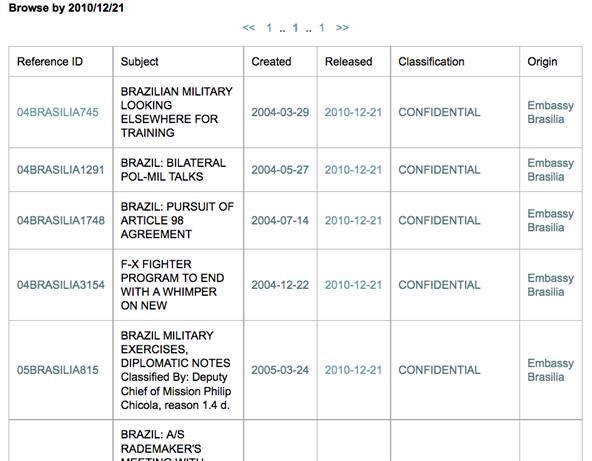 Browse the Cables by Creation Date

Browsing by the creation date lets you see the cables by the dates they were originally written and sent.

You can see the list of years directly under this section, dating from 1966 to 2010.  Clicking on your desired year will not let you see all of the cables from that year, rather it will generate a list underneath with links to the months from that year.

So, clicking on 1966 will show you only 1 month, since there are cables from only one month in that year, whereas clicking on 2005 will show you all 12 months, because there were cables created throughout the entire year (or at least ones that WikiLeaks acquired). 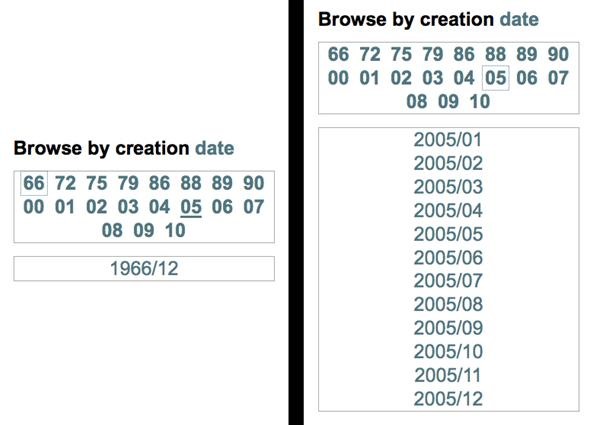 Browse the Cables by Origination

This section allows you to browse the consulates and embassies for which cables were originally sent from.  By clicking on a place, you can see all of the published cables that originated from that location.  However, you cannot easily browse by locations that received the cables.

You can browse all of the locations by clicking origin or you can search the locations in alphabetical order.  Simply select the letter of your choice to see what cities and urban areas are listed.  If you're searching for the embassy in London, simply select the L and select Embassy London. 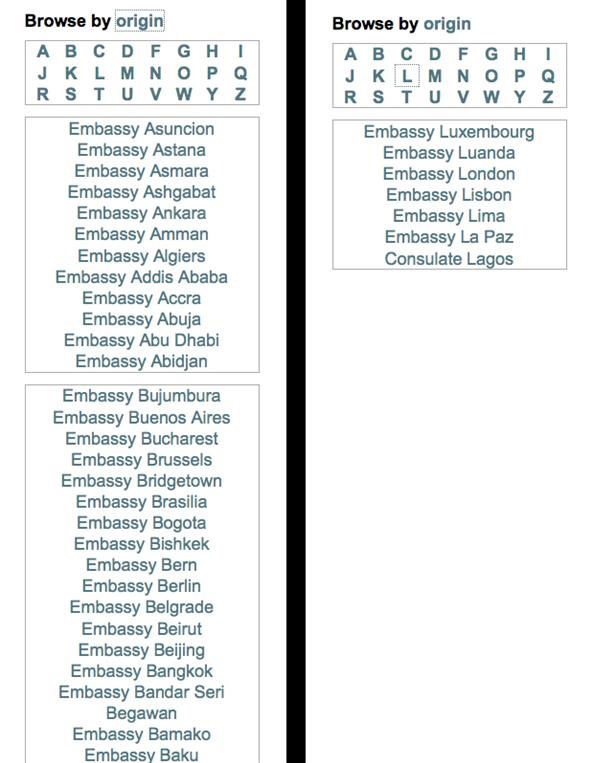 For a list of all the embassies and consulates, visit CableTags.

Browse the Cables by Tags

Browsing by tags can be a little confusing, if you're not sure what the tag means in the first place.  Tags in Wikileaks are most commonly acronyms.

You can search the tags by the letter of the alphabet for which they begin, but the list itself for that letter will not be alphabetized (weird).

But if you're searching for UFO, which is an acronym for Unidentified Flying Object, you're not going to find it.  At least, not yet.  But if you want to look up Military Operations, which has an acronym of MOPS, you'll find it under M.

Browse the Cables by Classification 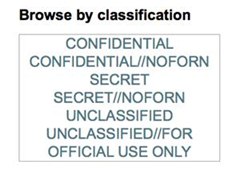 This one is pretty self-explanatory.  Clicking on one of the links will allow you to see all of the cables marked with that classification.

There are no Top Secret documents in these cables, so if you were looking for super secret information that could topple governments as they stand, then you've come to the wrong place.

A quick search on Wikipedia can tell you what each means.

Top Secret (not listed on WikiLeaks)
The highest level of classification of material on a national level.  Such material would cause "exceptionally grave damage" to national security if made publicly available.

Confidential
Such material would cause "damage" or be "prejudicial" to national security if publicly available.

Confidential//NOFORN
Same as above, with NOFORM meaning No Foreign Nationals dissemination, which restricts dissemination to U.S. nationals.

Secret
Such material would cause "grave damage" to national security if it were publicly available.

Secret//NOFORN
Same as above, with NOFORM meaning No Foreign Nationals dissemination, which restricts dissemination to U.S. nationals.

Unclassified//FOR
Same as above, with FOR allowing dissemination to foreign nationals.

Official Use Only
This is sensitive information that's labeled as restricted.

Step 5 Decipher the Anatomy of a Cable

There's a lot going on inside each cable, and at first glance, it's totally confusing.  But once you figure out what each line and abbreviation means, you'll know what to skip and what to pay attention to.  Below is a cable example, and below that, some documents that should help you be able to figure everything out. 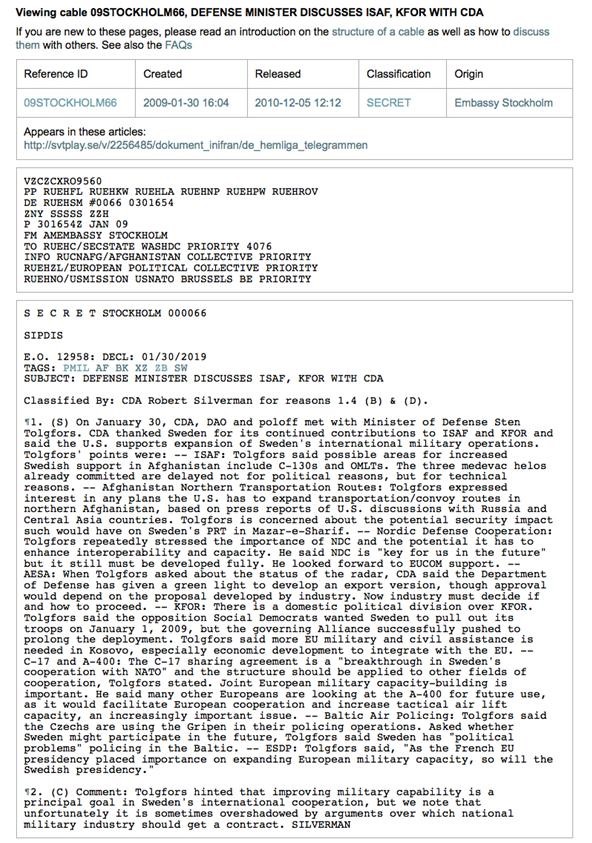 The following document tells you what everything means on the top portion of the cables.  In the above document, it would be everything from VZCZCXR09560 to Classified By: CDA Robert Silverman for reasons 1.4 (B) & (D). 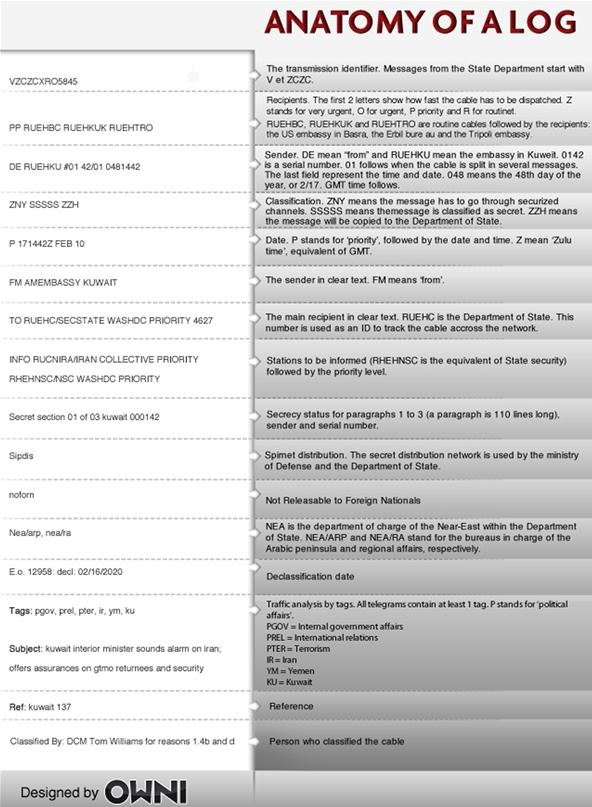 More information available about the above image at StateLogs.

Below is an example of an original paper cable, what one really looks like, along with a detailed breakdown of the parts.

You can download the above images in PDF here.

Though you won't find the TAGS in alphabetical order on WikiLeaks, in this list they are, for easier reference.  In time, as more documents get posted, more TAGS will likely be added, so if there are some missing, mention it in the comments and I'll update this list.

Those with asterisks (*) are Organization TAGS, with titles and/or acronyms of organizations approved for the WikiLeaks list.  Most of the acronyms consist of the initials of organizations.  However, because of computer processing of TAGS data, several codes are artificial.

Those with double-asterisks (**) are Subject TAGS which cover a broad area of information.

Those with triple-asterisks (***) are Program TAGS (K TAGS), which group documents together that cross Subject TAGS.  The grouping of documents allow for easy retrieval based solely upon program or office requirements.  These TAGS begin with the letter K and should be placed on the TAG line of telegrams and memorandums, along with appropriate subject and geographic TAGS. K TAGS do not replace Subject TAGS, but should be used as adjuncts to them.

Those TAGS underlined are, as of yet, unidentified.  If you know the meaning, please post it in the comments.