It's that time of year again when pizza boxes line the room and buffalo wings stain the couch.  When cases of beer sit in the cooler and the big screen TVs are fired up and properly calibrated.  When two of the best football teams vie for the championship title and the Vince Lombardi trophy.

And this year, on February 6th, it's the Green Bay Packers and the Pittsburgh Steelers in Super Bowl XLV at the Cowboy Stadium in Arlington, Texas.

But it's not just a time for football fanatics.  Even non-football fiends tune into the game on Sunday, but not to see who will get their Super Bowl rings— the whole world will be watching the Super Bowl ads.  Yes, the Super Bowl commercials, which could easily have their own prime time slot, without the Super Bowl backing it, though nobody would know what to call them.  They are, after all, the "Super Bowl" commercials.

And here's your first sneak peak— Volkswagen's Super Bowl ad, where a child dressed as Darth Vader uses the Force on his father's Passat.  It's already surpase 7 million views on YouTube, which shows just how much football and non-football fans love a creative commercial.  There's also 5 more Super Bowl 2011 ads below found on YouTube.

If you want to see more of these Super Bowl ads, you'll have to wait until Sunday.  Or click here to see just a couple more!

UPDATE:  All of the Super Bowl Commercials Posted Below

All of the Super Bowl commercials have been posted below in the YouTube section, for your convenience.  You can vote for your favorite directly from the video.  If you don't have time to watch all of them, then you surely can spare 2 minutes for this montage of all 61:

If you want to see the 2011 Super Bowl commercials, live nationwide coverage begins at 6PM (ET) on the FOX television network.

Most of you interested in the 2011 Super Bowl ads will stick with the online viewing experience.  That way you can skip the football fanaticism and stick with what you love— funny, witty advertisements.

YouTube and Facebook will be showing the Super Bowl ads online, along with contests where people can vote for their favorites and watch them over and over again.

YouTube is running its Ad Blitz contest for the fourth year in a row.  Here's it is, straight from the horse's mouth:

It's that time of year.  Watch the game.  See the commercials.  Find the commercials online and share them with your friends.  We are featuring the 2011 Super Bowl commercials in our annual YouTube Ad Blitz contest.   Watch the commercials here the minute they air on Feb 6th.  When the game ends, vote for your favorite 2011 commercial until Feb 14.  The winning ad will receive ultimate video glory with YouTube homepage recognition on Feb 19.  Have fun and let the best ad win!

And good news for all of you smartphone owners— Ad Blitz has gone mobile!

"The hypothesis there is you're at a party, at a bar, and say: 'Hey, what was that Doritos commercial?  Let's go take a look.  Who's got an iPhone?' " said Jim Lecinski, managing director for United States sales at Google.

Advertisers upload their ads for free and pay if they want to advertise them across YouTube.

This year, for the first time also, YouTube will offer remarketing.  That means that if you watch an ad on YouTube, it might follow you and appear again on another Web site you visit in Google's display ad network.  [via New York Times]

UPDATE:  ALL OF THE SUPER BOWL ADS

To make life a little easier, here's all of the Super Bowl ads listed on YouTube.  After you watch the videos, there will be a change for you to vote it up or down. 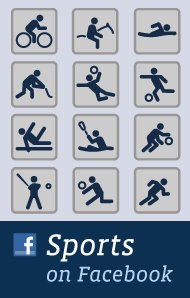 Facebook will have a similar contest called Facebook Replay, which will show the Super Bowl ads on its Sports on Facebook page.  It will tally how many "Likes" each commercial gets to determine the winner.

Facebook has become a big part of how people celebrate their favorite sports teams.  Facebook says that the day the Pittsburgh Steelers (800,000 Likes) and Green Bay Packers (325,000) advanced to the Super Bowl, 6.5 million related status updates were made by 4.6 million people.  During and immediately after the playoffs, the Steelers were mentioned in over for million status updates, compared to the Packers who were referenced 2.9 million times.  [via Inside Facebook]

Just tune in to the Facebook Sports page to watch and vote.

Hulu is also covering the Super Bowl ads madness with its Ad Zone, which will post high-quality versions of the ads when they air.  And just like YouTube and Facebook, there will be voting.

New this year is a spiffy looking widget that will update automagically with the new ads as they air. So no need to refresh the page.  It even lets you filter by age, gender and location in case you're interested in what scored high amongst 60+ women from Wisconsin.  [via Tubefilter] 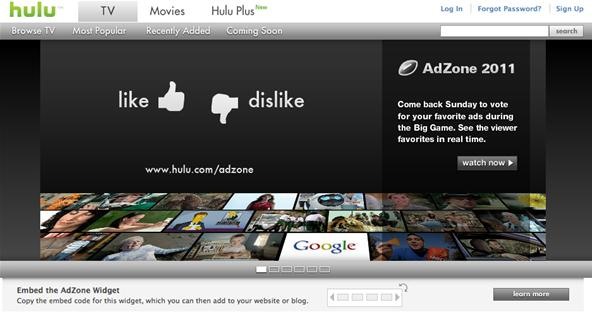 But don't expect to see any religious commercials this year.  Actually, you've never seen them before, so why would you see them now?  Because they try and try, but FOX just won't let it happen.  A commercial that explains a Bible verse (John 3:16) often displayed in the stands during the Super Bowl has been rejected.

Fox Sports refused the ad because, according to a statement, "Fox Broadcasting Company does not accept advertising from religious organizations for the purpose of advancing particular beliefs or practices."  [via New York Times] 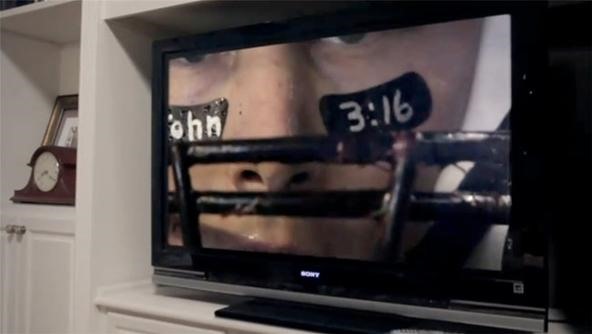 But really... how fun could a Christian ad be?