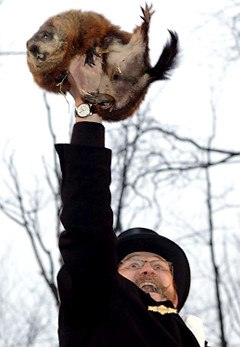 So what if he's right just 39% of the time? On Wednesday, February 2nd, when poor old Punxsutawney Phil crawls forth from his simulated tree stump in Gobbler's Knob, we'll be watching. After all, if an octopus can predict the outcome of the World Cup, we fail to see why a sedated marmot can't predict the weather.

Care to join us? VisitPA.com, the official tourism site of the Commonwealth of Pennsylvania is hosting a live stream of the event. Phil and his wild-eyed handlers are scheduled to make their appearance at 7:25 a.m. EST (4:25 a.m. PST), so you'll have to wake up early—or else stay up late—to catch the ceremony. But it's totally worth it. With snowfall in 49 of 50 US States, it's difficult to remember a time when the stakes have been higher.

Here, to whet your appetite, is a video round-up of Phil's previous predictions:

Not an early riser? You can keep up with Punxsutawney Phil via his official (or unofficial) Twitter accounts or poke him on Facebook.

Save 20% on everything in the Gadget Hacks shop this Cyber Monday with coupon code CMSAVE20. Apps and software in the store have even bigger savings with code CMSAVE40. And for the largest discounts, check out the online courses for 70% off with CMSAVE70. Don’t know what to get? We can help: