If you're looking to acquire the newest iPod model or latest Xbox without breaking the bank, your first stop would probably be eBay, maybe even the Amazon Marketplace, or any of the other reputable online marketplaces and auction sites. But you probably haven't hit up the penny auctions yet, and that could be a good thing, depending on how you go about it.

One of the biggest penny auction sites in the news today is QuiBids, an online auctioneer that charges $0.60 for each bid—and I'm not talking winning bids—I'm talking every bid. Personally, I would stay away from this site, but if you have the time to learn the game and come out on top, you may just get some good deals.

This article isn't meant to condone QuiBids. In fact, it's more of an advisory how-to to show you everything that goes into bidding on the site. If you think you can actually win some of these auctions, then by all means, give it a try. But for most of you, this will just reassure your doubts of success.

What is QuiBids Exactly?

QuiBids.com is an online penny auction site. But at first read, this statement is deceiving. You might think that you pay a penny to make a bid on any particular auction item. But it's quite the opposite. You actually pay $0.60 for each bid you make, only being able to up the current bid for the auction item by one "penny". Actually, the bid amounts vary in either 1, 2, 5, 10 or 20 cent increments each, where 5 cents is the norm.

But before explaining in further detail, let's check out QuiBids' own video on how it works.

Usually, the more you're willing the pay, the less the actual per bid amount, but in this case, if you do the math, you'd find that they all cost a flat 60 cents per bid. If you were hoping for some sort of deal right away—there is none. 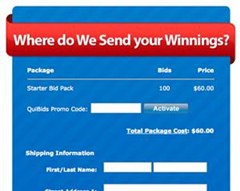 If you're new to QuiBids, these five options don't apply. You're forced to purchase a Starter Bid Pack with 100 bids for $60.00. You cannot bypass this. If you don't buy this, you can't start bidding. And as you can see in the picture to the right, they've already begun with some deceptive phrasing, i.e. Where do We Send your Winnings?, when technically you've won nothing. This is a required purchase.

Next, you're highly encouraged to start bidding in a Beginner's Auction, which you can only do once, that consists of more Bid Packs. You then start using your purchased bids to try and get another Bid Pack. If you happen to win it, great—but there's more work to be done.

Once you win this Bid Pack voucher, it doesn't automatically apply to your account. You need to "claim your prize"—which is odd, because it's not a prize, right? A prize is something you get for nothing, not something you purchase.

And this is just the beginning, which is meant to get you comfortable in the bidding process. I don't know about you, but I'm not comfortable yet.

Not Claiming Your "Prize"

Something to be warned about—if you're one of those many users who did not know they had to claim the "prize", then you might just lose it. You have a week to claim the auction you've won, and if you don't, everything you spent will be forfeited and you're officially screwed.

Step 2 Find an Auction and Bid

In the video, they use a Nintendo Wii as an example of an actual (not beginner) auction. You can see the bid price, the time remaining and the bidding history.

For new auctions, the price starts at zero. Each time a user makes a bid, the price for the auction goes up by 1, 2, 5, 10 or 20 cents, which is predetermined by QuiBids. You CANNOT choose your increment. Each time a user bids on the item, the clock gets reset, with a maximum of 20 seconds, so other users have a chance to bid.

Quote from the video: "Each time a bid is placed, the auction price will go up in increments of 1, 5, 10 or 20 cents. This increment is always shown at the top left of the product image. If there isn't one, it will automatically go up in 5-cent increments."

Now, as you can see in the video, there's a 2 cent bid appearing in the top left of the product image, which in fact is allowed. I'd say this immediately shows the unprofessionalism of QuiBids—someone I would not trust my money with. But I may be reading too much into this.

If you're currently the highest bidder, and no one else bids by the time the clock reaches zero, then you've just won the auction. In the video example, you see that someone just won the Nintendo Wii for $17.95, using 8 bids for $4.80. The Wii itself costs $239.99, so that's a whopping savings of $217.24. Awesome! Next you pay the shipping charge, in this case it's $9.50, which still saves you $207.74. Though they claim these kinds of deals happen for 80% of their users, from what I can tell, it's the exact opposite, with only 20% actually getting this steals.

In actuality, if you're committed to winning the auction, but there's also at least two others committed, you've got yourself a pretty good bidding war. Let's say three users want an Xbox 360 worth $300.00 and each are committed to winning the auction for $200.00. Each of them uses about $120.00 in bids to win it at $200.00, but only one can win. So, two people have lost $120.00 each, while the other is forced to pay $120.00 for bids + $200.00 for the final auction price + $12 in shipping, which equals out to well above the original $300.00 price tag. And they probably weren't the only ones bidding, which means QuiBids probably made over $400 from bids just for hosting the auction. However, QuiBids claim they take a loss on around 50% of the auctions run each day.

Update: Jill Farrand, Director of Public Relations at QuiBids recently told me that they do utilize popups on site to direct users to the Buy-It-Now feature (discussed in Step 4 below), to prevent users from overpaying.

This is the only part of the video that seems to be legitimate. You pay all the above costs with your credit card and fill out your shipping information. Easy enough.

If you really wanted to purchase the product, but lost the auction, then you have one chance left—Buy It Now.

If you lose, you can opt to buy the product anyway, for the full retail value minus the cost of bids you've already placed. Let's use the video's Wii example again. You've placed 200 bids worth $120.00 but lost the Wii. You can buy it at $200.00...um...wait, wasn't it $239.99 before? It was. Another editing goof? Or a way to make the final purchase price lesser and more enticing?

Something they don't tell you about in the video (but state on their site) is that it only credits bids purchased fully. For someone jumping right in, it would be confusing to understand the difference. If you won a Beginner's Auction for a Bid Pack, those bids have absolutely ZERO retail value in this aspect of the game, making the actual cost of the Wii higher. So, lets say that out of $120.00 in bids, $25.00 were "voucher bids", you would only be able to deduct $95.00 from the actual retail price, meaning you would pay $105.00 more plus shipping in handling. Should there really be a difference in bids? Shouldn't they all function the same way?

In the QuiBids blog, they try to make users aware that they should use the Buy It Now, so as not to waste their money. But in the process, they contradict themselves compared to the statements made in the video that 80% of users get great deals.

"If you are unsuccessful in winning an item, you can still apply any of the bids that you have used towards that item and still buy it for a price that is comparable to what you would pay at a local retailer. It is a fun and risk-free way to do your holiday shopping. However, many customers don't ever consider using the "Buy it Now" feature. Instead, they are interested in spending $20 trying to win a $1500 Apple Macbook. Although it is possible for someone to win the Apple Macbook with $20 in bids, it's highly unlikely. This is an unrealistic expectation that certain customers have. We encourage everyone to set a realistic expectation of how much time and financial investment is necessary to win a big ticket item."

If the above information didn't turn you off, then maybe you'll listen to others and save your money. Many users end up winning nothing but debt, calling it a scam. Some believe it's a pyramid scheme. Others believe it's rigged. And the rest of us just don't care to even risk it.

At first glance, it seems that QuiBids.com is related to Amazon.com, thanks to their logo in the top left of the website, which is different than their older logo in the video. Now, QuiBids has absolutely zero relations with Amazon, which makes this an attempt at legitimizing their illegitimate business model.

We're you fooled? You should have been, since today is April 1st—April Fool's Day. Still, this one-day-a-year-gag might attract some gullible users into thinking it has an Amazon affiliation.

Another thing you'll notice is if you haven't purchased any Bid Packs yet and you try to close the page. Instead of simply letting you close the page, they prompt you to talk to a "Live Agent" about last minute savings. No matter what you want to do, you're forced to press OK to go to a second prompt, where you can either stay on the page and chat with Rachel, the "Live Agent" or leave. 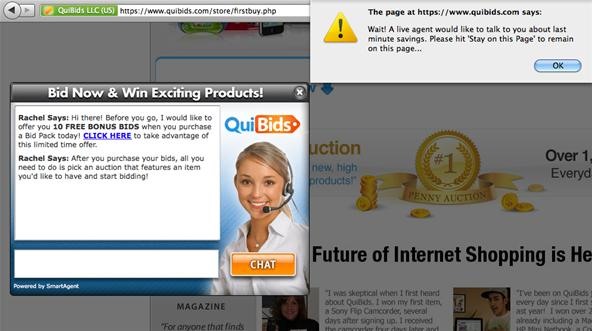 If you actually want to talk to Rachel, you'd find that she not really a "Live Agent", but more of a "Robot Agent" meant to sucker you into buying the Bids Pack. Here's an example from a discussion with new user George:

If these aren't reasons enough to stay away, and you think you still have a good shot at winning some auctions for cheap, here's a few tips for you...

If you do end up using QuiBids, be warned that it's highly addictive, because it's just like gambling. Think lottery tickets, slots, horse racing—it's all the same thing—gambling.

LOL IF YOU TYPE IN: wanna have sex?
she says: that is inappropriate.
then i said: ur inappropriate
you keep repeating the same things over and over.
she says: im sorry, but i must stick to a basic script.
i did not mean to repeat.