Google recently unveiled the start of their new social network Google+, which is set to compete with Facebook and fix the awkward, broken aspects on online sharing they claim exist. It's currently only open to a limited number of Googlers during its "field trial," and if you weren't one of the lucky ones given an invitation, you can still sign up to be notified when Google+ is available in your area. You can also stay up to date on its Twitter page, GooglePlus.

Even if you aren't participating in Google+ just yet, you may have noticed the recent changes to Google's homepage, which rolled out at the same time as the introduction to Google+. It simplifies an already minimalist webpage, adding a black bar to the top and moving some links to the bottom for a cleaner feel, gearing up for Google+ integration. 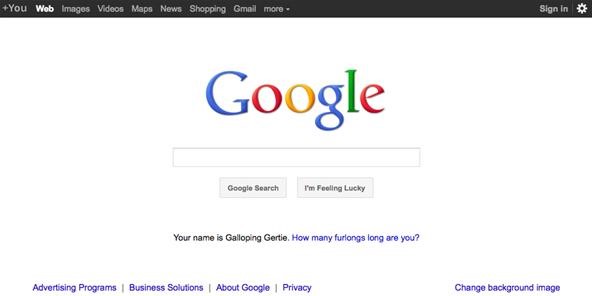 The new social network's features include Circles, which lets you share selectively to your specified groups within your personal network, rather than telling the whole world what you're thinking. You can already do this in Facebook's Groups, but Google claims that the current sharing structure of other social sites is sloppy, scary and insensitive. Is it better? Some say it's the "dumbest thing about Google+" because of its tediousness, but you can be the judge of that once it's available.

Also in Google+ is Sparks, a referral system designed to feed you highly contagious content based on your interests, Hangouts, which lets you meetup with your Circles via live multi-person video chat, Instant Upload, a quick way to get your pictures and files onto the cloud from your mobile device, and Huddle, a group messaging service that aims to make group conversation on your phone a cinch.

For those with an invitation already, you can download the Google+ mobile app for Android devices from the Android Market, but it's not available in the iTunes App Store yet. If you're interested in how Google+ will work, you can see it in action in the interactive tour.

What do you think? Will Google+ prevail, or will Facebook still be a devoted Googler's social network of choice?

I would love to see facebook disappear along with it's evil terms of service. Hopefully Google won't go down the "we own the rights to every picture/video/word you post" route.

Keith A Varley 10 years ago

looks really cool, but i want to see how they beat facebook pages.

over on quora, there's an interesting thread: http://www.quora.com/Will-Google+-overtake-Facebook-as-the-dominant-social-network - i think this feature is really cool: "Google+ lets you watch YouTube videos while videochatting with your friends."

the videochat is great... amazing FB hasn't launched yet (tho they will apparently launch a skype partnered platform soon). Circles is also the type of feature that FB should have implemented long ago.

I really like the design (what i saw of it). I also like the circle system to organize your friends in a what looks like userfriendly way. I love the idea of videochat and multichat too!! Really great that i won't have to use 2 different programs anymore. For now the only thing i don't like is that it's not out yet. Definately a worthy facebook competitor, and then some....

Yes, it's a shame it's not out yet for everyone to try out, but they're still working out the kinks, I guess. Even people with invites aren't getting in still.

thanks info- how social media become ? when Facebook + GG?

Google + is finally starting to come into its own. Google+ Links are now provided within the LinkedIn network, allowing our on-line publishing members and bloggers greater exposure through Google. The greater the Network, the more Social Impact we can expect.