Can you really make an explosive from salt, sugar and weed killer? Does glycerol and water actually recover text from burnt paper? Is it possible to develop film with a first aid kit and some orange juice? MacGyver says yes.

Want to know more of MacGyver's ingenious household concoctions for evading near-death situations? Then you're in luck, because someone has finally compiled all of MacGyver's clever hacks into one place, showcasing the ex-DXS man's brilliance in one single webpage—MacRecipes. 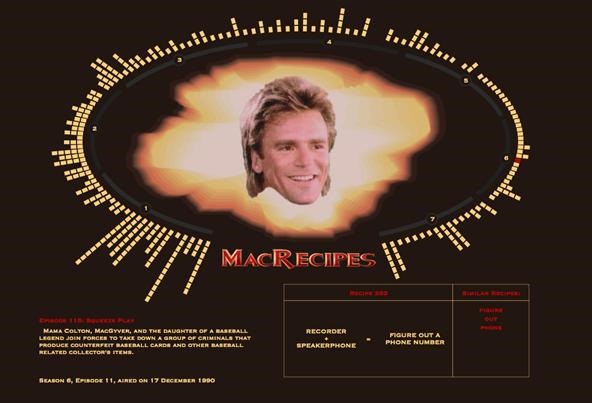 Chris over at Fathom scoured old MacGyver episodes and assembled data from MacGyverOnline and IMDB to create the ultimate recipe book for MacGyverisms. It's every single hack that Richard Dean Anderson ever employed through his seven seasons as MacGyver—all 313 of them! Not surprisingly, the first season accounts for nearly a third of the hacks, most likely because of an increase in plot and lack of "Opening Gambit" sequences in future seasons.

Just click on the square dots to see the recipes from each of the 139 episodes. You can then see the list of ingredients in the bottom right box, along with related recipes from other episodes.

The only thing MacRecipes forgot about are the how-to videos!

Check out this video for Recipe 82 (how to make an arc welder with a car battery, jumper cables and coins). And learn something easier than Recipe 206 (instead of seeing through frosted glass with motor oil, try tape). Or something a little more high-tech than Recipe 117 (instead of tube and headset earpiece, make a digital spy stethoscope).