At Google I/O this morning, Google finally announced the launch of its much awaited Google Music service. It's currently in invite-only beta mode, but they claim it will open up to the masses soon enough. To start syncing your music library with Google's Cloud now, you need make sure you're signed into your Google Account, then click here for a personal invite. It's currently free for a limited, undisclosed amount time.

This is great news for those of you with Android devices, because Google Music streams your song files to your smartphone or tablet without taking up any internal storage space—everything's stored on the cloud. But it's also bad news for those outside the U.S. since it's only available in the Unites States.

From what's in the video above, Google Music looks smoother and easier to navigate than Amazon's Cloud Player, and it looks similar to what one would expect from Apple's soon-to-be cloud service. The user-interface looks simple, yet flashy on mobile devices with its CoverFlow-like browsing. Here's what you have to look forward to with Google Music: 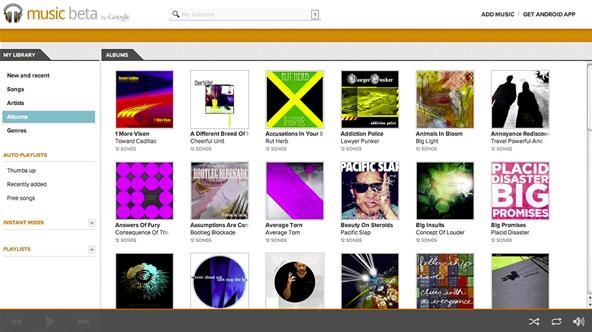 Initially, Google tried to make a deal with music labels that would allow them to scan your whole library to determine which music you own, so you could skip the upload step and so they could save on server space. Not surprisingly, the deal did not go through and you will need to upload all of your music files to Google's Cloud. Depending on how many songs you have, it could take hours, days—even weeks! It's the only real downside to Google Music.

Want to master Microsoft Excel and take your work-from-home job prospects to the next level? Jump-start your career with our Premium A-to-Z Microsoft Excel Training Bundle from the new Gadget Hacks Shop and get lifetime access to more than 40 hours of Basic to Advanced instruction on functions, formula, tools, and more.

If you have a limited tier-type data plan, such as an iPhone with AT&T, you'll have to be conscious of how much you listen to. Like Pandora, those those minutes of data per song add up after a while. While not enough to bump you over a limit by itself, when combined with other habits (web, youtube, etc..) it should be considered a factor.

The offline option is probably the best part, I don't think the Amazon player has that option.

the cloud is such superior system, i wonder if (hope) apple will follow suit.

I doubt it, but there is always hope!