Gone are the good old days of McNally Maps and Thomas Guides. When you have something as powerful as Google Maps, why bother with anything else? Plus, you can have way more fun with Google's version compared to its paper counterparts. You can find cool things, create a fake chase sequence, and even prank the whole world into thinking you're dead. I imagine the only enjoying thing you can do with those paper maps is make paper airplanes, maybe some decoupage.

Now, there's a new way to entertain yourself with Google Maps... Rorschmap. 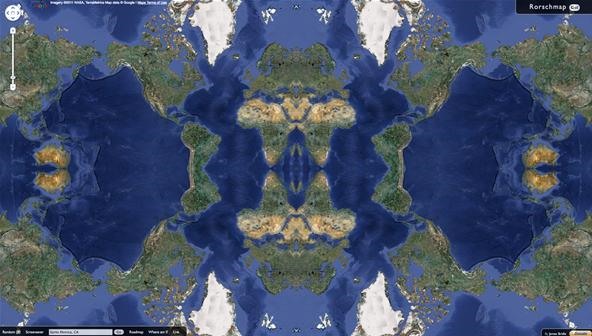 There's a reason why James Bridle's online project is called Rorschmap, and that's because it looks just like a Rorschach test would. To see a psychedelic inkblot of your city, town or state, just visit the Rorschmap website and enter your location just as you would in Google Maps. Rorschmap will then transform the Google Map into a crazy kaleidoscope version, for which Bridle refers to as "cartographic navel-gazing, a reframing of the map."

You can zoom in and out just like on Google Maps, as well as move the map around—only you're unlikely to recognize where you're at, which makes it amusing to try and spot local landmarks. There's also a "Go!" button in the top right-hand corner which turns the map into an animated kaleidoscope, which looks more like a black hole devouring all of the surrounding land mass. It may make you nauseous if you stare for too long, so watch out. Don't get sucked in. Literally.

Rorschmap works best in Safari or Chrome on a Mac, and is optimized for the Apple iPad. But it seems to work just fine in Firefox, as well as on a PC.